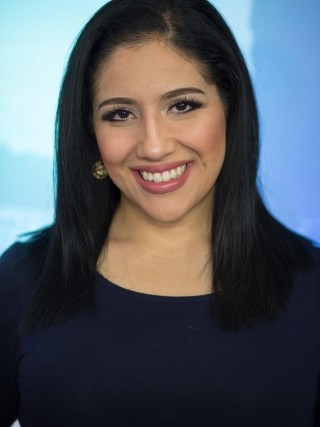 Nazy Javid is an emmy-nominated news director and anchor with North Coast News TV. She anchors the 6 p.m. newscast on on KAEF ABC 23 and has been with the station since 2016.

In 2019, Javid was recognized by the National Academy of Television Arts and Sciences with an emmy nomination for her coverage of the Camp Fire, during which her own family narrowly escaped with their lives, losing their home in the deadliest and most destructive wildfire in California state history.

Javid began her broadcast journalism career in 2005 as a reporter in the San Francisco market for The Bay Area's KFTY TV50. During several years there, she hosted three half-hour shows called Your Turn, TV50 Marketplace and Dining Out with Nazy. She also worked as a dayside general assignment reporter and an evening headline news/weather/traffic anchor.

Prior to that, Javid attended the University of California Davis, graduating with a bachelor of arts degree, double majoring in pre-law Political Science and Communications, with a double minor in Theatre and Dance.

Javid first made her debut as a reporter/anchor on DCTV/AGTV, the local TV and campus news stations in Davis and at UCD. Following that, she was accepted into an internship program through UCDC, serving as a junior reporter for Tribune Broadcasting at White House briefings, Senate hearings and Capitol pressers.

Before she joined North Coast News TV, Javid studied law at California Southern Law School. She was then hired as a reporter with KAEF/KBVU and later promoted to anchor, then news director. She is known for covering local court cases, being first at the scene of breaking news, and advocating for local citizens.

Additionally, Javid is actively involved in the community, serving as an emcee for many events and organizations like the Boys and Girls Club of the Redwoods, chambers of commerce, Relay for Life Humboldt, Hoops and Heroes, Northern California Community Blood Bank and many more.

In her free time, Nazy hosts a weekly webcast, serves on the NATAS Board of Governors and is a licensed Zumba Fitness instructor. She is also a proud stepmom of four and dog mom who has a social media page dedicated to her chihuahua, Barbie.

If you're looking to chat with the Persian-American journalist, you can always find her on social media, or out in the community where she's known to chat with anyone and everyone who approaches her.