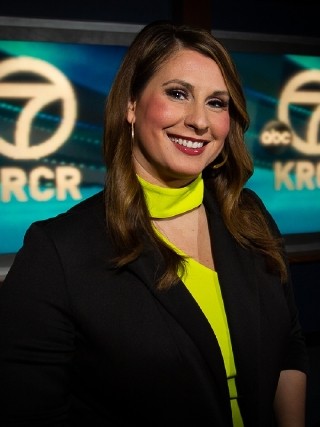 Originally from Southern California, Tamara graduated from the University of San Diego with a degree in Communication Studies and a minor in Theatre Arts. While in college, she worked for the San Diego Sports Arena on a sports magazine program called "Gulls in Flight." Tamara reported on the lives of the hockey players and their wives. She also interned at KGTV-TV, in San Diego.

After graduating from college, KGTV-TV hired Tamara as a producer and she spent the next year writing and producing family, health and financial segments broadcast on four McGraw-Hill television stations across the country.

Her on-air career started at KTWO-TV in Casper, Wyoming where she produced and anchored "Good Morning Wyoming" and the K2 News at Noon. She'll never forget shoveling snow and driving to work at 3:30 AM to see a wild buck welcoming her in the station parking lot.

Her next stop was in Palm Springs, California, at KESQ News Channel 3, where she spent the next 9 years as an evening anchor and reporter. She had a chance to cover a number of historic events, including President Bush's visit to the desert and live coverage on the funeral of former President Gerald Ford and former first lady, Betty Ford. Tamara reported, live on the red carpet every year at the Palm Springs International Film Festival, interviewing the Hollywood's top celebrities. Among her most memorable moments was being twirled on the red carpet by one of her favorites, John Travolta, interviewing Clint Eastwood and Leonardo DiCaprio. In 2010, her red-carpet coverage was nominated for an Emmy award. In 2009, Tamara received her first Emmy Award for Team Coverage of winter weather.

Tamara first moved to the North State in 2013, where she worked as the main evening anchor at KHSL/KNVN.

In 2015, she moved to Central Illinois, where she spent the next 3 years anchoring the morning show, WAND-TODAY and WAND News at Noon.

Now, Tamara is thrilled to be back in California, closer to her family and particularly in the North State, where she first met her husband, Bobby. In their spare time, they love spending time with family and friends, exploring our beautiful state and spoiling their 5 lb. Yorkie, Tally.